Blue is blue, right?  Of course not.  There are thousands and thousands of hues. This makes identifying an  unknown cultivar... well, impossible. So if an iris gardener is to keep track of a cultivar's correct name, it means labeling and tracking.  The reproductive habits of iris make this fairly easy.

The various bearded irises are not bulbs. They are rhizomes. like ginger.  That's right, ginger root is technically a rhizome, with which most people are familiar.  The reproduction of an iris is most commonly  by what is called "increase."  A rhizome produces one and only one bloom.  This then becomes a parent to other rhizomes that grow off of it.  The rhizomes can be divided, really must be divided, once every 3 to 5 years to assure that they remain healthy and have room to bloom.  Increase produces new irises identical to the parent. Therefor, labeling the rhizomes as they are divided produces a correctly named cultivar.

While iris can be produced by seed it requires some care.  After the flower withers the fertilized fruit must remain intact until is dries and drops its seeds.  These then must take root... since I remove stalks when all blooms are gone, it's just not going to happen.

Currently I am careful to label and track what I have and order from reliable sources..  However there was a time when I purchased from some large retailers and what I received was not always true to name.  I also have a number of irises from Borglum's that are the result of natural cross-breeding.  Dana tells me to name them myself. And so I have. But even then some may actually be named cultivars that just found their way to the mixed beds.

So here is my tale of blue.

Years ago I bought Ocean Pacific and Monet's Blue.  One of the blues that has grown very well here is clearly Honky Tonk Blues though I don'r remember having purchased it..  I went to the AIS Wiki.  I also visited Dave's Garden, but my iris savvy friends assure me that AIS (American Iris Society), of which I am a proud member, is far more reliable.  We shall see.

There is another problem about online ID.  The camera, settings and lighting added to the trueness of the computer display presents a broad range of photos purporting to be the same cultivar.  Unless I find ten images with 3 or 4 that seem to be the same, I don't trust what I have found.

This is my picture of what I am quite confident is Honky Tonk Blues: 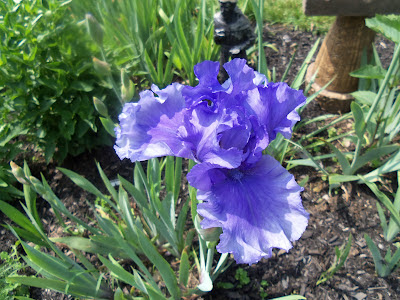 Here are two photos from the AIS Wiki:
The heavily ruffled look is true to description and the base of the leaves has a purple cast, which Dana tells me is true to the cultivar.
Note that the first photos has the distribution of gray more to the edges of the fall as does mine. 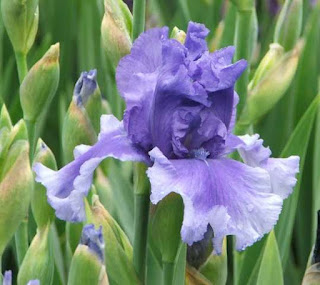 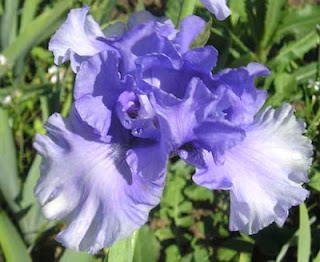 So now on to what I thought I had bought, Ocean Pacific.
The first is from from the AIS Wiki.  The white/yellow beard is clearly not the blue characteristic of Honky Tonk 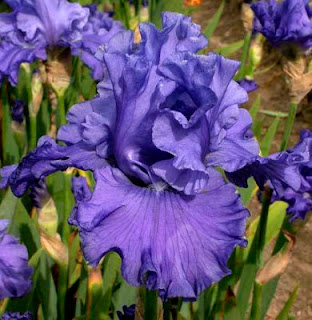 The next two of OP are from Dave's Garden... clearly some contradictions. 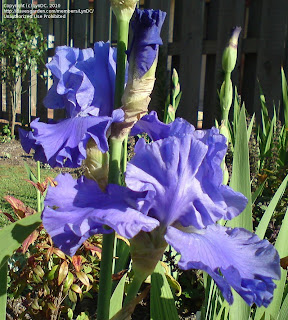 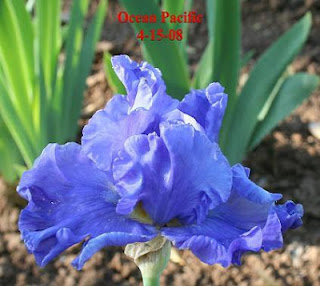 Now on to the other culprits.
Here is what I had labeled as Ocean Pacific, but now believe is Moner's Blue, but there are problems with that. Neither picture has the hyacinth cast or the white plicate on the haft of the fall, 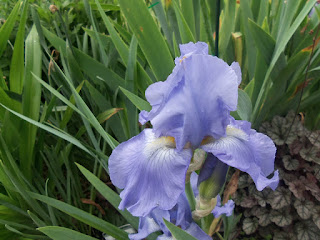 Monet's Blue is described as being a light blue and not medium blue as is OP and Honky Tonk.
Here are two pictures from the AIS Wiki label Monet's Blue: 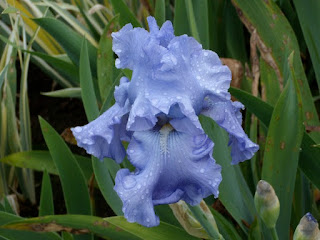 This one has a white beard... 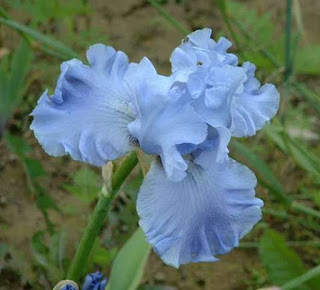 This one a white beard and clearly the shades of blue do not seem to match well at all.  That could be the result of the growing season, soil nutrients, or simply camera exposure.


So what's my point?  It's fun to collect named cutovers and see how they perform in my garden.  It's also fun to enjoy what blooms and live with some mysteries.
Posted by Neil Houghton at 10:24 PM