Common wisdom was put on it's head during a trip yesterday to Tully, NY. Many people think that Louisiana Irises are hard to grow, especially in northern climes.  MJ Urist owner of Louisiana Iris Gardens in Tully, NY says, "They're a weed."  A weed she has obviously fallen in love with and devotes a great deal of time cultivating.  With hundreds of varieties, her open house was an education for me.

The Louisiana blooms after the bearded iris have gone and certainly would extend iris season in any garden. (The Louisiana season is just starting and the bearded has come and gone.) The flower is more akin to the siberian, but with a larger flower and color pallet. Indeed it is know for having the closest to true red of any iris.

Foliage is brighter green, lighter in texture and more narrow than the bearded and it enjoys being wet.  As to the idea that it can't be grown north of the Mason-Dixon line, MJs spectacular success puts the lie to that.  She does say that you can expect fewer bloom per stem, but she not only lives at the same latitude as my garden, but add 1000+ feet of altitude.

Betty and Jim rode down with me to Tully and we all enjoyed MJ's hospitality and fount of knowledge.

Urist travels to Louisiana yearly and returned with  some Spanish Moss to accompany the Zydeco music in the background.

In the tent were issues of Fleur de Lis, journal of the Society for Louisiana Irises and a 'rhizome exposed' display of the plant. 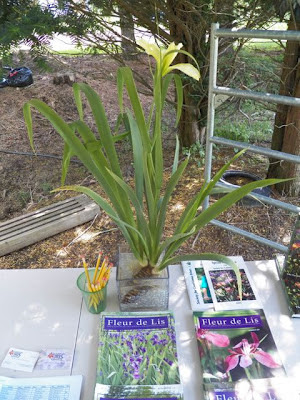 An issue of the journal feature's an article about MJ's rescue of one grower's collection from Houma, LA that was washed away by Katrina.  Still potted she has many seedling that are blooming for the first time this year since 2004.  "There's a wonderful surprise every day," she said.  And here is the surprise when we were there...