First thanks to all who worked so hard to make this show happen!  Wendy Roller, the chair, used her incredible expertise as an AIS judge to know what needed to be done. To Betty Schnellinger for coordinating venue arrangements and to Cara Hutchings, our local president ( and Nate for iris expertise and leg work) and to Judy Rossi committee member and fellow  iris enthusiast.  It was great working with them all.  Also a shout out to local master gardener and AIS Region 2 President, Donna Lowry. (More on her contribution to my personal success in a bit.)

It was a few years ago that I saw my first AIS judged show with my friend David Cupps.  I was visiting him in Lexington when the Bluegrass Iris Society was holding their show. Shortly after, I became involved with my local affiliate.  Since I joined this is our first AIS sanctioned judged show.  Because a show must be scheduled well in advance and iris bloom season is subject to unpredictable factors, they sometimes must be cancelled or don't have enough participants or entries to award ribbons.  Everything fell into place this year.

First I learned that the difficulties of transferring stems that can be 40" long with easily damaged blooms cannot be exaggerated.

Several beautiful blooms did not make it at all, I just left them in the box.  Most notably Gypsy Romance and Bold Look.

Some blooms were damaged but I entered them anyway.  I just wanted to put these new and stunning intros in the mix. 'Sharp Dressed Man' was perfect when it left the house.  But a the wrong touch with a neighboring bloom and the top of three flowers lost a standard.  It still received a white ribbon and was one of three that tied for the public favorite poll.

During the judging and even the placement I keep focused on the hospitality/information table where I was working.  As best in class was decided the blooms were moved to the winners table for consideration as best in show.  I saw a pink iris being placed from the corner of my eye.  It looked like one I brought in.  It bloomed about 5 days ago and Kyle told me about it. He doesn't keep close track, but he loves pink and this was a beauty.  I knew I had two pinks, 'Beverly Sills' and 'Vanity' that were moved during the great borer attack of 2011.  Donna Lowry was over Friday for the annual open garden. I asked here which this was.  "Definitely Vanity," she said.  And Vanity it was.  She wandered over to tell me I was going to be glad she stopped over. With perfect blooms perfectly placed it won Best in Section. 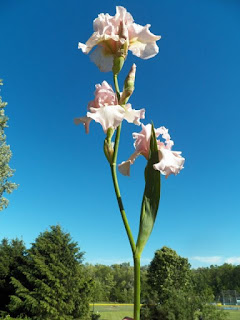 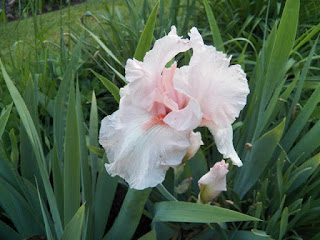 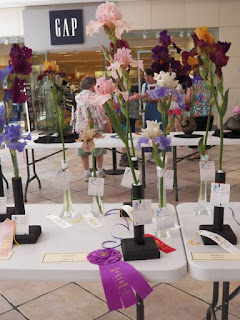 When I went to the table to see what, if any, other awards I had won.  I was awarded another 'best in section' rosette for 'Action Packed.'  This Black 2011 introduction went directly to my garden and bloomed for the first time yesterday.  The bloom was smaller than I expected. I really took it in on a lark. With only one bloom and lots of unopened buds,  it seemed an unlikely winner.  However the unique coloration and exceptional branching wowed the judges... 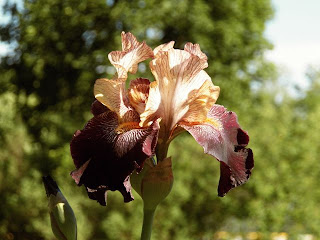 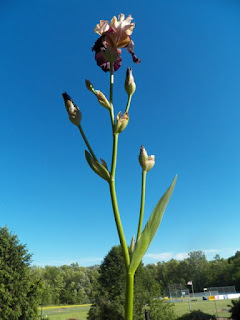 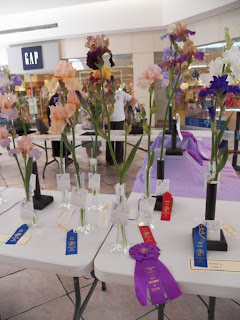 Each entry is judged as a first, second or third place entry and awarded a blue, red or white ribbon.  Then, at the judges' discretion, a rosette may be awarded in each section.  These are then ellegible for Best of Show, First Runner-up and any other show award.  Each of the above also recieved a blue ribbon. 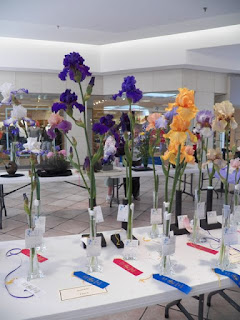 Red Ribbons were awarded for my entries of 'Queen's Circle' (the 3 bloom faded and I removed it), 'Bumblebee Delight' (a thinly branched specimen), 'Frontline' (the third bloom was showing much wear) and 'Art Form' (a two bloomed stalk which was not quite straight).

Posted by Neil Houghton at 7:31 PM