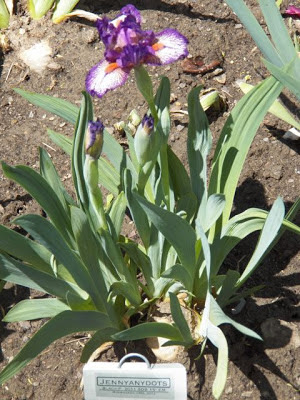 On Sunday morning, before I had to drive to Albany, I took to the garden to dig plant and record the state of things.  A frost was threatening for that night and the next.  Happily we bottom out at 33º and all is well.

This is a panoramic shot of most of my iris beds:

Note the in the front center SDB 'Jennyandots' had just opened and nearby were others that were about to bloom (Bed D-3) and directly behind that one of what I believe to be 'Immortality,' an early white TB  is open.

'Jennyanydots' is toward the top limits of of standard dwarf bearded in height (15"). This bloom and more budding is from a new rhizome form Mid-America planted last year.  This 2011 introduction by Paul Black is delightful. 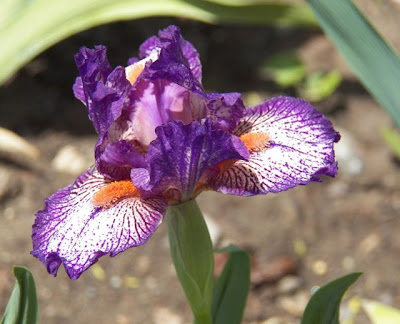 Another Mid-America SDB is is Thomas Johnson's 'Star of India.'  The aptly named 2011 introduction is substantially shorter, less than 10". Posted by Neil Houghton at 6:26 PM