Yesterday was fairly hellish. Meeting in Albany scheduled for 10-4 so I went to the Amtrak station to catch the 5:32 AM from Rochester.  It was delayed till 5:55, then 6:15 then the engine broke down between Rochester and Buffalo.  We were told that it could "take a while."  Antrak's website still said 17 minutes late after the station display said "boarding" and "departed." Finally went to the window...  I was told that it would be hooked up to the next train and arrive at 2 PM or later.

Called Kyle.  Switched cars and started driving to Albany about 8:30, arriving at noon.

Meeting was frustrating at many points and ended at 5:15 pm.  Drove home, arrived at 9 PM and crashed.

The weather was beautiful yesterday but this afternoon and the rest of the week it is going to be raining (60% chance) through Sunday.  It clears up on Monday... just when I am back in Albany.

So to keep my spirits up I share this picture of 'Hosta Schnellinger' and head into the garden! 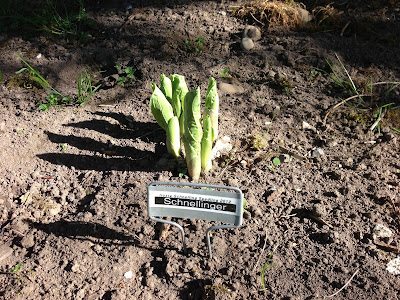 Posted by Neil Houghton at 4:46 PM