If any iris screams, "Thomas Johnson!" this is it.  Deep blue falls with the 'Flash of Light' from the center are crowned by bright yellow beards.  The radiating lines are striking and the white standards are kissed with a powder blue cast. 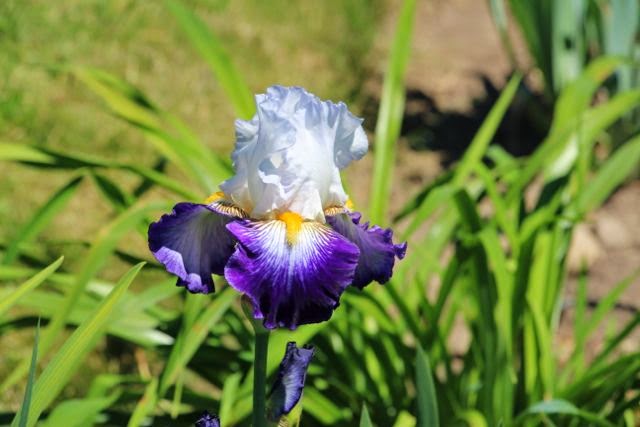 Blooming at 33" around June 7 in my garden two years after planting a rhizome from Mid-American, 'Flash of Light' is not subtle. 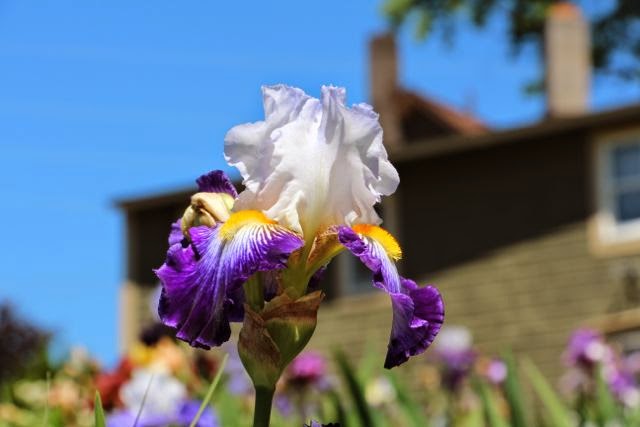 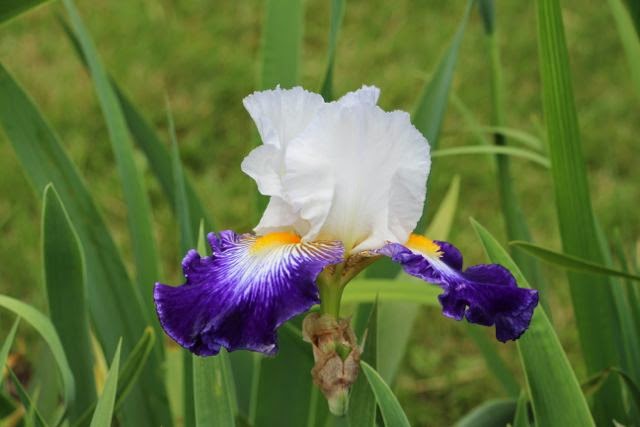 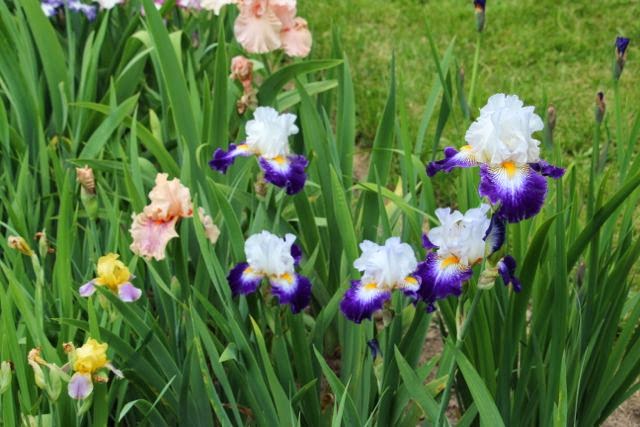 Posted by Neil Houghton at 5:00 AM No comments:

'Dangerous Mood' is an impressive bi-tone.  The dark, almost black falls support a light blue cloud of standards.  Several year ago I picked up packaged rhizomes (2) at Home Depot.  You can never count on what you'll get from these shriveled rhizomes.  To be fair you can never be absolutely sure what you'll get from many growers.  So when they finally bloomed I ended up with an amoena.  Which one?  Maybe you can help! Here they are together, 'Dangerous Mood' on the right: 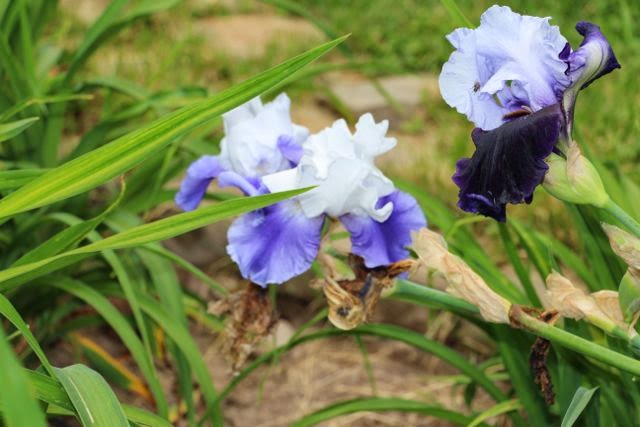 I have both because I ordered 'Dangerous Mood' directly from Schreiner's last year.  Below is a clear picture of the bloom.  In my garden its peak bloom this year was June 7 through 11. 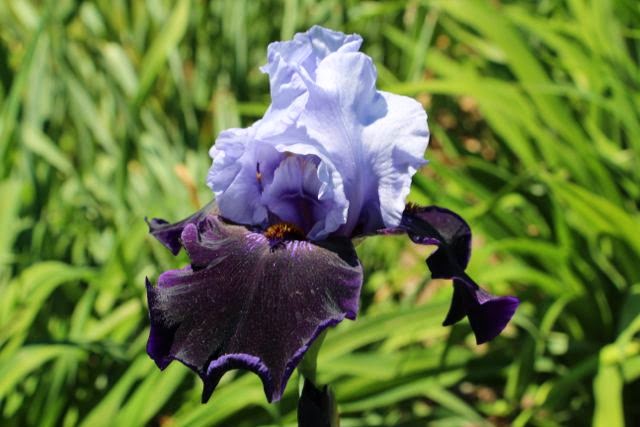 Posted by Neil Houghton at 11:36 AM No comments:

Not Another One of Those! 'Ink Patterns'

There seems to be a plethora of white irises banded in blue/purple.  When my friend, David, said, "I love 'Ink Patterns' I thought, not another one of those. 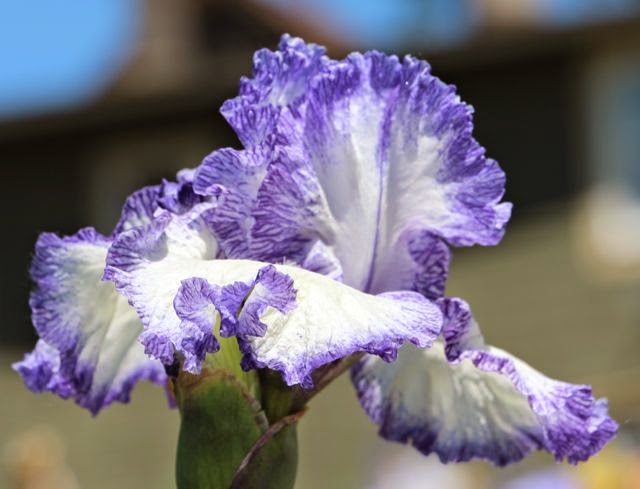 I planted a rhizome from Mid-America in 2012 and this year it bloomed for the first time. With all the variations on this theme including Dykes winners, 'Jesse's Song' and 'Stepping Out' this holds its own. 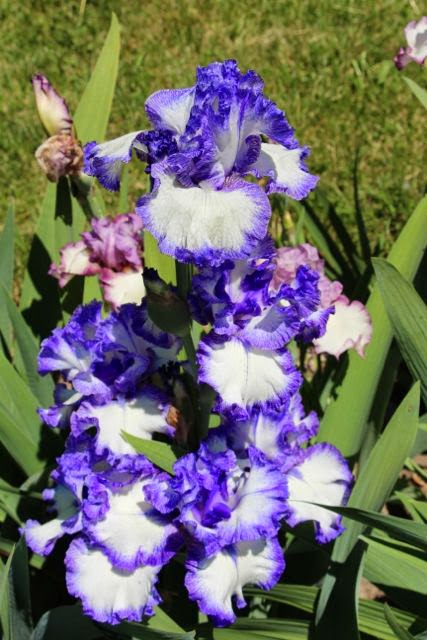 The plicata is heavily stitched and almost blue.  The heavy substance, lovely flower form and bloom production make it a garden stand-out.  It blooms on a solid stalk and with a little grooming I can imagine it showing well.

I also like the fact that the edging on the standards match those on he falls.

Mid America says of this 2007 introduction by Thomas Johnson:

Exuberantly ruffled white flowers have indelible inky blue stitched plicata bands around falls. Standards have wide washed and stitched plicata bands with dotting inside them and lines up midribs. Styles are wonderfully contrasted, inky, dark indigo. A clump of INK PATTERNS in the garden is unforgettable. It is sure to catch the judge's eye at shows.
36" (91 cm) Sdlg. TW81B: American Classic X Royal Estate

Here it is with 'Good Life' a 2010 Paul Black introduction.  The magenta-violet and blue-violet of these two work very well together. 'Good Life' was also planted in 2012 and bloomed this year for the first time. 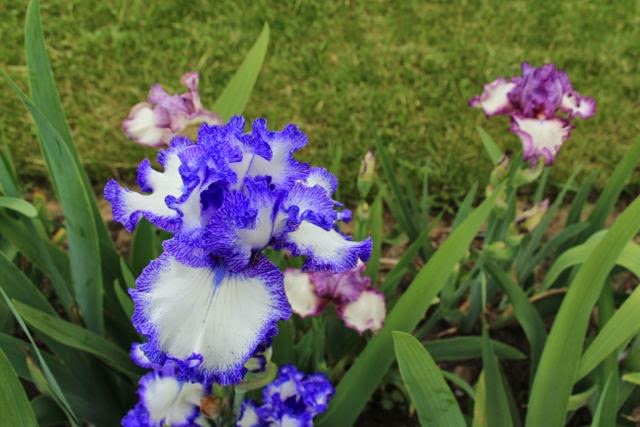 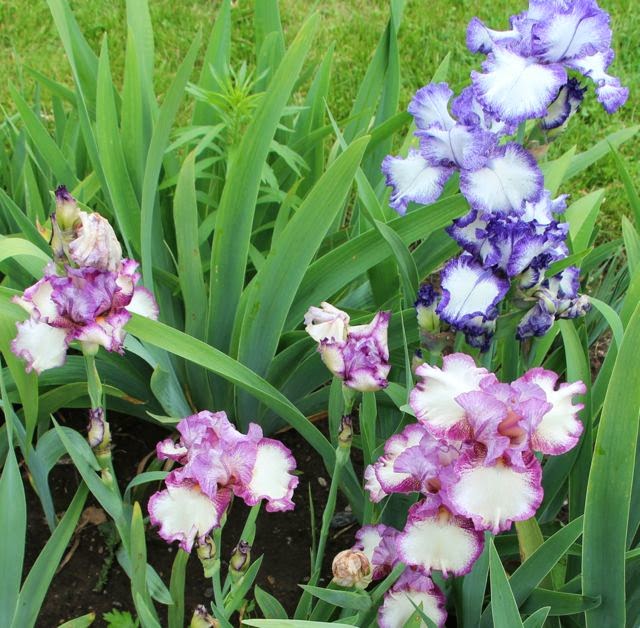 Good Life is not just another one of those, either!
Posted by Neil Houghton at 3:26 PM No comments:

Purchased in 2012 'Outer Edge' grew well last year, but did not bloom.  Lots of increase paid off this year! 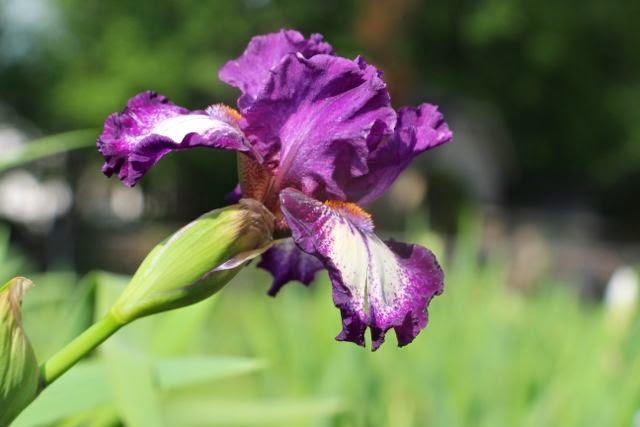 Evening light pulls out the rose in what appears as a deep violet. This 2011 Intro by Paul Black is 23" IB.  Mid-America describes this cultivar: 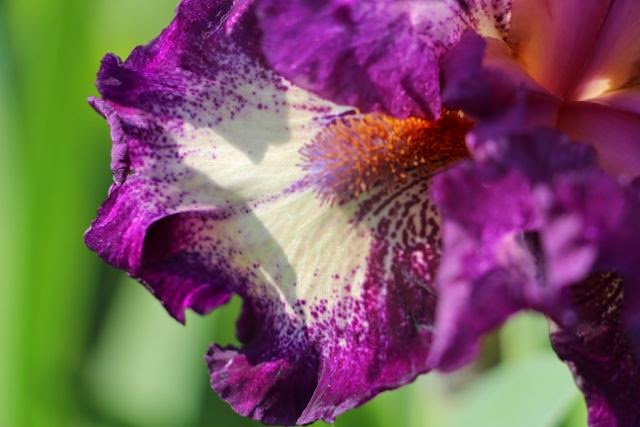 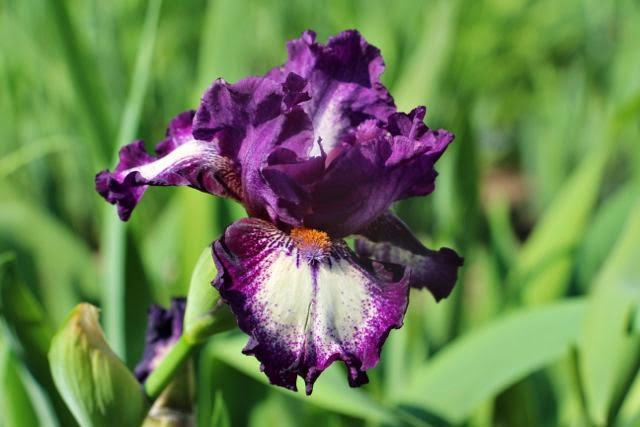 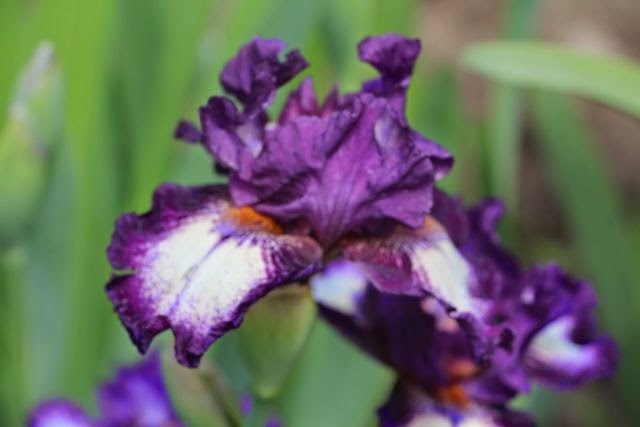 Here a clump of year two after planting a single rhizomes, shows 'Outer Edge' as great garden plant.  Some fine show stalks are in there.  It started blooming May 17 this year, peaked May 24 and bloomed until May 28. 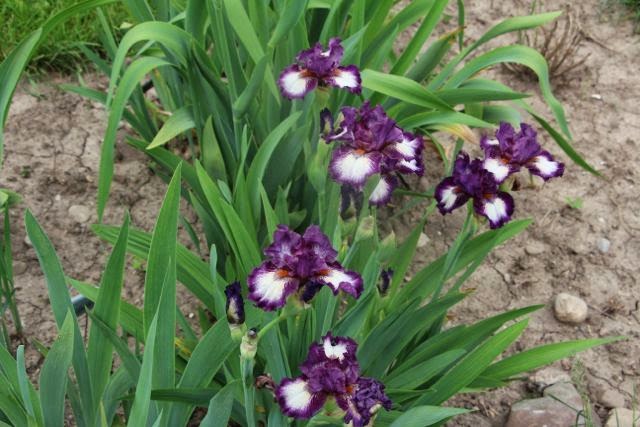 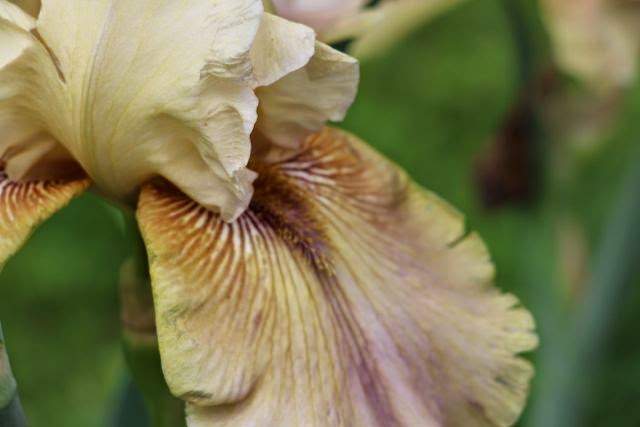 I learned a lesson.  Next year I am reserving iris bloom time for only iris related activities.  I will enjoy the fruits of my labor more fully and visit the gardens of others!  I would add live blogging of my garden's progress, but I think that is just too much to expect.

Now that bloom season is winding down and I have labeled the 2,000+ garden photos so far, I am aim to feature one iris at a time.  The goal is to talk about its vigor and bloom in my garden in upstate New York near Rochester.

It was a long hard winter.  The late start and muddy mess that dominated the soil under an insulating blanket of snow, had me concerned.  Indeed many perennials in my garden did not live to see the 2014 season.  Some newly planted rhizomes did not make it.  This season the bloom overall was spectacular!  Some rhizomes newly planted last year produces profusely.  Here is the most incredible example: 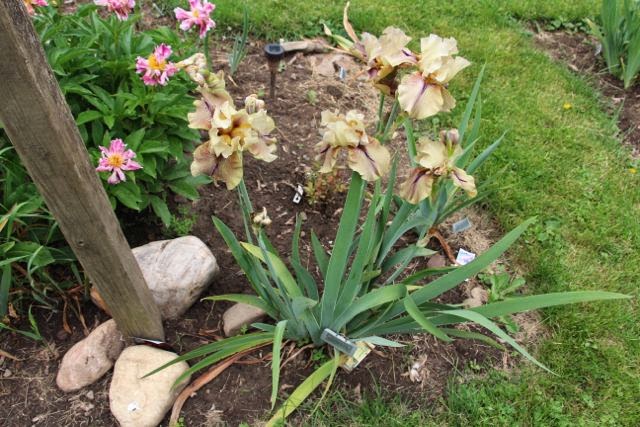 'Thornbird' is a newly acquired American Dykes Medal winner (1997).  These blooms on three strong, 38" stalks are from one rhizome from Schreiner's planted last year.  Blooming was observed on June 8 when I returned from a four-day trip.  On June 14 several blooms were still beautiful.

The the ecru base of this flower, overlaid with violet and a greenish cast make it unique. Having seen pictures only I was not a devotee. Now that it has bloomed in my garden I am won over.  The blooms are large with great substance.  Deep violet beards that terminate in a thin horn accent the falls perfectly.

Written 10 days ago, here is a post that got lost in the shuffle of Iris Show.

Here are some of the Tall Bearded Iris in bloom.  Please stop by anytime to see them in person.  The Camera does not capture it all.

The first three are from my "Bestiary" section.  Sometimes called "zebras" these broken-pattern iris offer a quirky take on beauty.  Brad Kasperek is the hybridizer who dominates this group.  His creative, whimsical names reflect the amusing look of these iris.

Wild splash of magenta make this am "end-of-day" in parlance of glassware.

This parasol is wildly marked with less garish colors.  The washed center on the falls is typical of these broken-pattern iris.
This is my favorite.  I moved it last year and it is very happy! Blue watercolor splashes on a pale blue background make this a subtle beauty.

Now to the more conventional!

The moment I saw this at Mid-America I had to have it.  The sunshine of this beauty is lost to the camera.  The flounced and laced standard are stunning.  Edged with the brilliant yellow as if dipped in ink, draw the eye straight to this cultivar.


Clearly historic because of the tear-drop falls and smoothly edged standards, this is a resilient iris.
Can anyone name this for me?

From Dana and Sylvia's place.

This one has been in my garden forever.

Posted by Neil Houghton at 6:36 PM No comments:

Please excuse my self-indulgence.  When I get some more time I will include others, but today, enough about me, let's talk about ME! 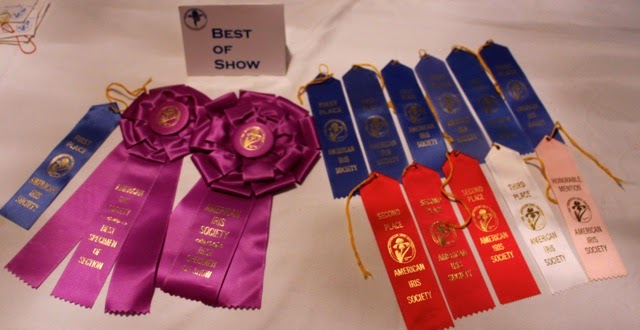 Yesterday's Greater Rochester Iris Show was a big day for me.  A "newbie" by iris club standards, I was thrilled to win the awards above.  On the left are the prizes awarded my entry of 'Stepping Out.'  This 1964 Schreiner's introduction is one of the most highly honored irises of all time.  My specimen won and blue ribbon, then a "Best of Section" and finally, "Best of Show."  Six of my other entries won 1st place blue ribbons, 3 won 2nd place red ribbons, 1 won 3rd place and 1 received an honorable mention.
'Stepping Out' has deep violet banded falls, with with a pure white center.  Kyle has been telling me I have "too many purples," but when this bloom stepped out he declared it a favorite.  The excellent placement of blooms also impressed the judges!

Paul Black's 2010 introduction 'Better Than Butter' was my favorite new bloom in 2014.  Planted in 2012 this is the first bloom season.  When I saw it in Oregon at Mid-America Garden's I knew I had to have it.  It is growing well in upstate New York.  A blue ribbon winner!

Acquired from Borglum's Iris Garden's in Geneva, 'Art Form is a stunning bi-tone.  It's very tall and sturdy. Another blue ribbon winner.

Heavy plicata in a light violet made 'Jesse's Song' a Dyke's Medal winner in 1990.  The 4th blue ribbon

Blue ribbon number 5 went to Schreiner's introduction from last year. This brilliant golden yellow packs punch in the garden.  With only one bloom stalk I was hesitant to cut it, but the amazing branching a large substantive blooms made it 'best of show' potential. Despite all attempt to force the side buds to open, it was not to be.  This is an iris that won't be rushed.  Which means it will provide a stunning garden display for more than a week.

The 6th blue ribbon was the only border bearded entry. The white with purple banding of 'Orinoco Flow' is marked by a narrow band and the white is lightly peppered with the border color.  This iris won the British Dykes Medal in 1994.


In the even that the winner cannot fulfill it's duties this 1st runner-up will be wear the crown.  Wendy also won second runner-up and the Magdelan Award for best median iris.  More about her later!

My entry of 'Stepping Out' won Best of Show.  More on the show later. 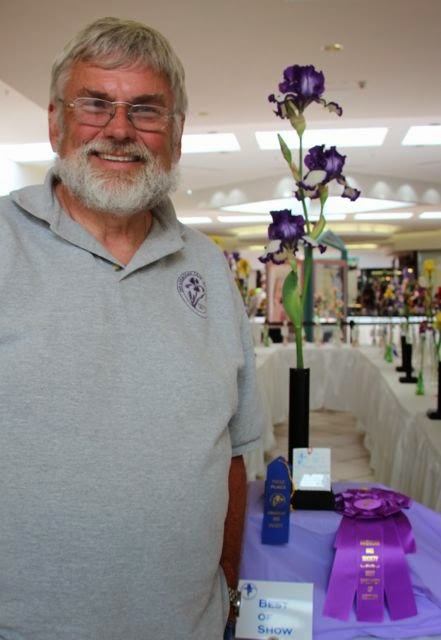 Posted by Neil Houghton at 12:59 PM No comments: